Plot:
Diana (Gal Gadot) grew up on the isolated island Themyscira populated only by women. But not any women: Amazons, warriors with an amazing lifespan from a time where gods still walked the earth regularly. Taught by her mother, Queen Hippolyta (Connie Nielsen) and her aunt Antiope (Robin Wright), commander of the guard, Diana grows up with a strong sense of right and wrong. So when the world outside literally crashes into hers in the shape of World War II pilot Steve Trevor (Chris Pine), Diana is sure she is meant to help to end the war, even if it means going against the wishes of her mother.

I maybe wasn’t quite as enthusiastic about Wonder Woman as I would have liked to be (as it’s a female superhero in a film directed by a woman), but I did enjoy it a lot. Definitely the best of the DC movies so far.

My favorite part of the film was, hands down, the part on Themyscira. It was such a beautiful atmosphere and a great setting and I loved the dynamic between Diana, Hyppolita and Antiope in general and everything Antiope in particular. I wouldn’t have minded if they had made an entire film out of that setting.

Although I wouldn’t have wanted to miss the glorious No Man’s Land scene that was perfect in pretty much every way. Unfortunately having that scene in the middle of the film meant that the showdown could only pale in comparison, and it did. But maybe that was also because I was a bit irritated at the ending. For one, the big reveal was not as much of a twist as the film seemed to think it was – it was pretty obvious for at least half an hour before things went down. I also found it a weird beat that Steve who has known Diana for all of five seconds gets to lecture her on who she really is. 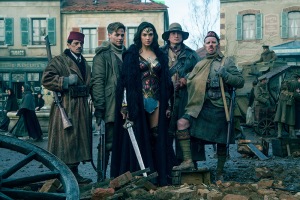 Also irritating was the complete absence of the rest of the Justice League (apart from the mini Batman reference) and that Diana was mostly alone among men once she left Themyscira (although the scenes with Etta (Lucy Davis) were simply delicious). And finally what bothered me was that we got yet another instance of an disfigured villain. Which is an ableist trope and it needs to stop.

But despite those misgivings, I really enjoyed Wonder Woman. I loved it for giving us a perfect superheroine, for an emotional story that picked the right moments to be funny and for the complete absence of the male gaze. We need more films like it – and I really hope we’ll get them.

Summarizing: I’m pretty happy with it.