Plot:
When Annie (Meera Rohit Kumbhani) returns home after a short trip, she finds a carton fort in her living her room and her boyfriend Dave (Nick Thune) inside that fort. Only that he claims that he can’t find his way out of the fort anymore, as it’s somehow gotten bigger and mazelike on the inside. After Dave forbids her to enter the fort, in case she got lost as well, Annie calls in a few friends for help and finally decides to go in and get Dave out. Much to her surprise, though, it turns out that Dave isn’t having a mental breakdown, he’s actually telling the truth – and now they’re all lost inside a maze that seems set to kill them.

Dave Made a Maze is sweet and funny and very well done. Despite a couple of things that I would have liked to be different, it’s entertaining and thoughtful from the first second to the last. 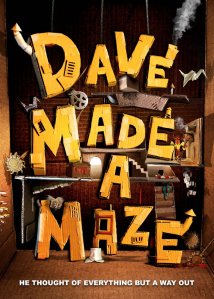 Dave Made a Maze works both when taken at face value and when understood as a metaphor. For me it was a metaphor on getting stuck in perfectionism when you’re working on something. To finish something you need to accept that it’s never ever going to be perfect. But you can interpret the story in many ways, and that reading is just one of them.

And the maze is simply amazing. The sets they built, the sheer creativity that went into the maze and its deathtraps, it’s simply astounding. That alone is worth the price of admission. Easily.

Sometimes the film misses its mark (like the carton vagina and its effect – that was way too Freudian for my taste), and it could have stood more women and more POC in the mix. It also leaves the audience with a couple of plotholes (like the old guy, the tourists or how Leonard could follow them so easily).

But other than that I really have no complaints. It’s a fantastically entertaining and charming film with great (and painstakingly made) special effects. It put a smile on my face and let me bounce out of the cinema – a rare quality in films that I absolutely treasure.