Plot:
Jeffrey (Daniel Pujol) drags his two best friends Tom (Christian Nicolson) and Gavin (Lewis Roscoe) to a SciFi convention. Being a fan of SciFi, particularly the old stuff, he enjoys himself immensely there, but Tom and Gavin are less into it. But somehow all three of them get pulled into an old B-movie. Literally. What seems like a bad joke at first quickly turns into an amazing, but also dangerous adventure.

This Giant Paiper-Mâché Boulder… has many charming idea, but in the end it was way too conservative and sexist for me to enjoy. 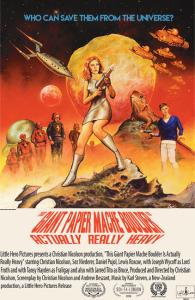 Most of the film goes as you’d expect it to go: as B-movie clichés and modern protagonists clash in different ways, there is a lot of room for meta commentary on the tropes of the genre, or rather of the genre at the time (50s and 60s). And a lot of it is very successful in being a loving hommage and an ironic commentary at the same time. The sets alone are a sight to behold.

The plot then takes a turn I didn’t expect: it turns out that the guys are sucked into that movieverse because there’s a machine at its heart that can’t come up with any new ideas and desperately needs more brain power to create new stories. And the guys aren’t the only ones who have been sucked in in the past. And I’ll give them that: I liked that concept. (Despite the fact that it ignores how much truly innovative SciFi is being created, especially when you look past the usual white dude creators.)

The problem is that it is too little too late. This twist comes after almost two hours of revelling in all those clichés in all of their sexist (and lookist) ways. And there’s a lot of that. It’s just not subversive enough, instead it starts to reproduce what should be criticized. Imagine the potential of this film if it hadn’t been three able-bodied white cis guys who had been sucked into the film but literally anybody else.

It may very well be that my frustration with that lack of perspective change also made the film feel way too long, but whatever the reason, I would have liked it to be somewhere between half an hour to an hour shorter than it was. But even then I’d probably still see it as a missed chance.