I have to admit that I didn’t know the story before this film. I haven’t read many of Christie’s novels (crime is not really my genre) and Murder on the Orient Express wasn’t one of the ones I did read. Nor have I seen the other movie version(s). And my first thought about it is that it’s incredibly stupid (which is unlike the other Christie stories I read) and absolutely contrived. Plus, the ending goes against every one of my legal philosophy convictions (as much as I have them in any case) and it just doesn’t fly for me.

So maybe that’s more why it felt like the film spirals continuously out of control than Branagh’s direction. But then again, the film does end up referencing (extremely unsubtly) The Last Supper and that’s all Branagh and didn’t work for me at all.

The best thing about the film were the first 10 minutes before Poirot actually boards the train. If the film had managed to keep up the tempo of those 10 minutes, paired with the sense of humor that didn’t completely derail the film (as it does at times later in the film… I mean, are we really supposed to take Poirot seriously?), it could have been great, especially with that all-star cast.

Instead the film is pretty much a mess that doesn’t seem to know what it wants to be. There are moments here and there where the film it could have been sparkles through and the cast really gets to shine. But it just isn’t enough. 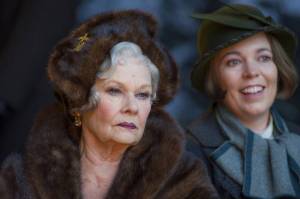