Plot:
Bella (Kristen Stewart) survived the birth of her daughter Renesmee (Mackenzie Foy) and is quickly adapting to having become a vampire like Edward (Robert Pattinson). But the arrival of a half-human, half-vampire child causes quite a few ripples in the vampire community. And when the Volturi hear about it, they believe that Bella and Edward turned a human child into a vampire – a capital offense they will make sure will be punished.

Well, it is over. I think that is about the best one can say about this. But they manage to have basically nothing happen in the movie at all (though they did force some action in, and quite cleverly I might add) and to not resolve anything, really. And I think that if you haven’t read the books, the whole thing only makes a limited amount of sense. At least, with 3/4 of a rum bottle I shared with C. during the film, it was quite entertaining. 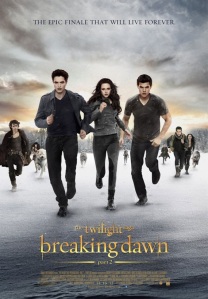 END_OF_DOCUMENT_TOKEN_TO_BE_REPLACED

Plot:
Bella (Kristen Stewart) and Edward (Robert Pattinson) are finally getting married and Jacob (Taylor Lautner) even stops sulking long enough to talk to Bella for five minutes, before Edward whisks her off to their own private honeymoon island. Within a few days, Bella realizes that she is pregnant. Since Edward is a vampire that should be impossible. And that’s only the beginning of the trouble.

Breaking Dawn was pretty much what you’d expect it would be – only that I undererstimated the amount of alcohol I would need to get through it and then we hit the birth and I wasn’t drunk yet and then we hit the imprinting and I had to beg aber_karramba for some of hers because I was all out. [See also.]
But apart from that, given the source material, the film wasn’t actually that bad. 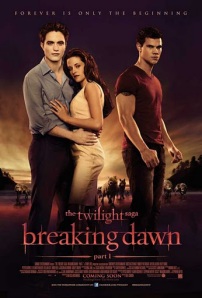 END_OF_DOCUMENT_TOKEN_TO_BE_REPLACED

Eclipse is the third part in the Twilight Saga, based on the books by Stephenie Meyer. It was directed by David Slade and stars Kristen Stewart, Robert Pattinson, Taylor Lautner and Billy Burke. You probably know this already. At least, if you’re not living under a rock that has a special shield against pop culture/teenage fan girls. [Here are my reviews of the other films and the books. (I must have been high when I wrote the reviews of the books, though. Or probably severly brain damaged from reading them.)]

Plot:
Bella (Kristen Stewart) loves Edward (Robert Pattinson), our vampire hero. Edward loves Bella, too! Yay! Unfortunately, Jacob (Taylor Lautner), our werewolf hero, loves Bella as well and thinks that Bella loves him but doesn’t want to admit it. Since Bella’s opinion is generally completely inconsequential, nobody cares that she’s pretty clear on that point, though.
Anyway, amidst all this drama, there are some evil vampires. And more evil vampires. Who work for another evil vampire. And stuff’s going down, but nobody cares anymore.

If you can’t tell by my plot description: I was very disappointed by Eclipse. Because for all their faults (and they are plenty), the Twilight movies were very entertaining so far. Eclipse is not. It’s boring. It didn’t make me laugh. In fact, I laughed once and that was at an actual joke!!!!111!!!eleventy!!! Oh, the state of affairs…

END_OF_DOCUMENT_TOKEN_TO_BE_REPLACED

Plot:
Valentine’s Day is an episodic film about various couples on Valentine’s Day (SURPRISE!). I can either go into very much detail right now or none at all and I choose none. :)

I went into the movie seriously expecting to cringe all the time. To my surprise, Valentine’s Day was not completely aweful. Yes, it’s a RomCom as full of kitsch as they come. There are hardly any surprises and there’s nothing that hasn’t been done yet (and probably better). There are so many people, the characters suffer. But it entertains and is definitely watchable (something that can not be said about other movies in this category).

END_OF_DOCUMENT_TOKEN_TO_BE_REPLACED

[Here’re my reviews of the books and the first movie. OMFG. I just re-read my review of Twilight (book)… bloody hell, I must have been braindead at the time of writing that.]

New Moon is the second movie of the Twilight Saga based on Stephenie Meyer‘s books. It was directed by Chris Weitz and stars Kristen Stewart, Taylor Lautner, Robert Pattinson and Billy Burke.

Plot:
Bella’s (Kristen Stewart) birthday is coming up and she’s worried because she’s going to be 18, but her vampire boyfriend Edward (Robert Pattinson) will be an eternal 17-year old. When, during her birthday party, she cuts her finger and makes co-vampire Jasper (Jackson Rathbone shares this role with the most ridiculous wig ever) almost eat her. So Edward decides that he is too dangerous to be around and leaves Bella (taking his whole family with him). Bella sinks in a deep hole of despair that can only be kinda filled by Jacob (Taylor Lautner), best friend cum werewolf. And then things get really bad.

You thought Twilight was craptastic? New Moon is worse. So much worse. All the actors seemed unable, or at least unwilling, to act (except for Billy Burke and Taylor Lautner). Chris Weitz sucks so much. And yet, it isn’t a bad adaptation of the book, though it could have been better.