Plot:
Bella (Kristen Stewart) and Edward (Robert Pattinson) are finally getting married and Jacob (Taylor Lautner) even stops sulking long enough to talk to Bella for five minutes, before Edward whisks her off to their own private honeymoon island. Within a few days, Bella realizes that she is pregnant. Since Edward is a vampire that should be impossible. And that’s only the beginning of the trouble.

Breaking Dawn was pretty much what you’d expect it would be – only that I undererstimated the amount of alcohol I would need to get through it and then we hit the birth and I wasn’t drunk yet and then we hit the imprinting and I had to beg aber_karramba for some of hers because I was all out. [See also.]
But apart from that, given the source material, the film wasn’t actually that bad.

The movie has many, many problems. Most were expected since they were exactly like in the book. But a few were the problems of the film. For example that they decided to film the wedding in real time was a bit shortsighted. I mean, it was about three weeks long. The only thing that was awesome about it were the awkward speeches we got to hear. So realistic. Also, Billy Burke, I love you.

The other really good scene was the After Credits scene with the Volturi (Michael Sheen, Christopher Heyerdahl and Jamie Campbell Bower) that was about 30 seconds long – and way too short that way. 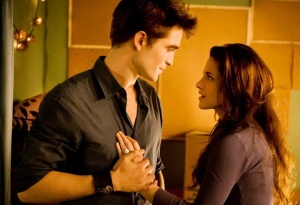 But the rest of the film was so completely and irrevocably and truly terrible that I don’t even have words. The anti-choice rhetoric thinly masked as choice, the complete and immediate inability of Bella to do anything on her own anymore as soon as she realizes that she’s pregnant, her total lack of taking part in decisions that concerned her, the imprinting, the lack of plot or characters that have more than two dimensions, …

That is all in the book(s) though, so it is kind of harsh to criticize the film for this. But that they chose songs that exactly reflect the same sentiments (“I surrender who I’ve been for who you are”. Seriously, people. Seriously) and that I won’t overlook.

Almost equally offensive were the CGI wolves. Yes, they were better than in Eclipse, but that doesn’t make them good by a long stretch. And really, when you have pony-sized wolves walking around a field of mud, how hard is it to put some pawprints in the mud? 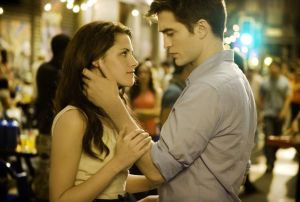 Summarising: You need to know what you’re getting into. And pack an extra bottle alcohol.