He’s Just Not That Into You is crap that disguises itself as a Romantic Comedy. It’s directed by Ken Kwapis and has a rather long cast list.

Plot:
Based on a self-helf book, it wants to give advice by showing the relationships of different couples, whose lives are intertwined.
Gigi [Ginnifer Goodwin] is constantly dating guys in the search of Mister Right. [Apparently she’s what we’re supposed to believe is the archetype of a woman looking for a man.] After a mediocre date with Conor [Kevin Connoly], she meets his best friend Alex [Justin Long] who tells her about the dating behaviour of the people and how she can tell whether a guy’s interested or not. [As a barkeeper, he knows these things.] Conor, on the other hand, is actually in love with Anna [Scarlett Johansson], who thinks that they’re best friends but doesn’t want more of the relationship, while Anna’s friend Mary [Drew Barrymore] is prowling the internets for a man. Anna coincidentally meets Ben [Bradley Cooper] and falls in love with him. But Ben is married to Janine [Jennifer Connelly], and even if their relationship is not the best, he doesn’t want to have an affair, although he’s immensly attracted to Anna. Ben’s best friend Neil [Ben Affleck] is in a long-term relationship with Beth [Jennifer Aniston], who wants to get married. But Neil doesn’t believe in marriage. Beth, Janine and Gigi all work together and share their men troubles.

To be honest, I have difficulties commenting on this movie as a movie, because I spend most of the time being outraged about the message it was sending. This made it quite impossible to concentrate on performances or directing. 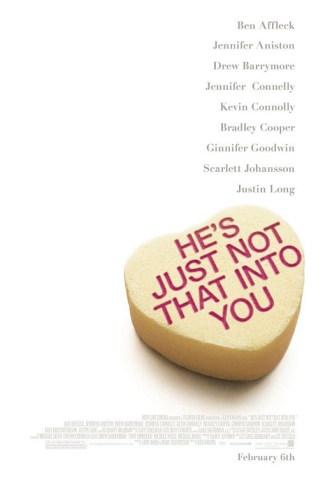 You know, I’ve heard good things about this film. Well. Good things is probably exaggerated, I heard that it didn’t completely suck. So I thought I’d give it a shot [plus, I had a 2 hours time hole to fill before watching Doubt].

Anyway, it was bad. It was very, very bad. Reinforcing every stereotype ever about gender questions, it not only showed us how women are, but also how men are and how gays are. [I think, in this case, lesbians, transgendered, transsexuals etc. should be happy that they were left out as usual.]

Women dissect and overinterpret everything, all their aspirations are to find a man to marry, then buy a house and have kids. Men, on the other hand, are afraid to commit, are emotionally distant, if they have emotions at all  and only think with their cocks. [Oh, btw: another beautiful example.] And gays? They just have to look at each other to know whether they want to have sex [which apparently equals a relationship with “those people”] and they are of course not at all weirded out when a complete stranger tells them about his relationship problems. Because they – as do women – like to gossip, right?! 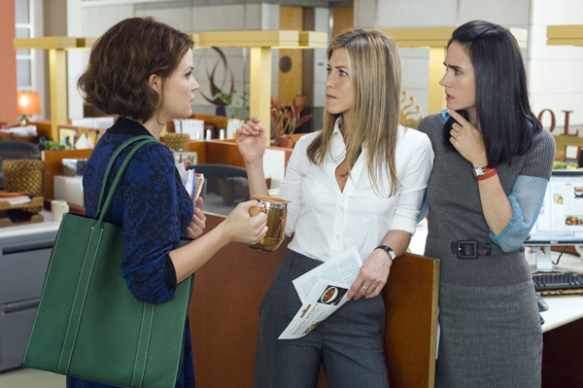 Okay, I could go on for ages about this crap. I won’t, I promise, but I still have to get a few things off my chest.

First: With Gigi, the question always is: Is he interested or not? Not once, not even once did she say, “Nah, I’m really not into that guy.” That actually goes for every woman in this movie. It’s never, “Do I want to be with this guy?”, it’s always, “Does he want to be with me?”
And you know what: I damn well know whether I want to be with a guy or not. If I don’t, what should I care whether he wants to be with me or not? And if I do, I’ll figure it out BY ASKING HIM [if his actions don’t speak for themselves like uhm he has another girlfriend etc.] and not by reading some stupid non-existant signs.

Second: Apart from the stereotyping, I just don’t agree with the view that love is/has to be a game between two people. I think that love – as any other emotion – should be openly spoken about. Why can I say that I’m afraid of millipedes or that I find Christian Bale really hot, but not that I love this guy or that guy? I mean, fear of rejection can’t be it, because honestly: People could make fun of me because of my fear of millipedes. Christian Bale could tell me that I was butt-ugly and that he wouldn’t fuck me in a thousand years, even if I was the last person on earth. Why is somebody telling me that he doesn’t love me the same way I love him so much worse?
Anyway, this opinion automatically disqualifies me from enjoying this movie. Because it’s all about the games. It’s all about getting the better deal from the partner. All about winning. And that sucks. [It also isn’t true.]

If people just could get over that, life would be so much easier.

To their credit, sometimes people just said what they wanted. Neil’s and Beth’s story for example: Beth said that she wanted to get married, Neil said that he didn’t. There was no trying to trick the other person into anything, no ultimatums. [There could have been more of “probably there’s a solution to satisfy us both” instead of an instant break-up, but hey, you can’t have everything.] That was quite refreshing, because in RomComs that usually doesn’t happen. Unfortunately, they didn’t stick to that concept through the whole movie. They should have.

Okay, I think I’ll leave it at that and not bitch anymore about all this stuff. Just be warned that this movie sucks. Big time. And that movies like this should be outlawed.