Plot:
Simone (Alexandra Maria Lara) just got married to Philippe (Yannick Renier), youngest member of a very rich family. When obviously senile Konrad (Gérard Depardieu) shows up, it is clear that he is somehow connected to the family – and Simone starts to show an interest in him. But matriarch Elvira (Françoise Fabian) seems worried about the childhood memories that keep bubbling up in Konrad.

Small World is a nice film, though at times it seems a little too clichéd. The cast is brilliant, especially Gérard Depardieu. 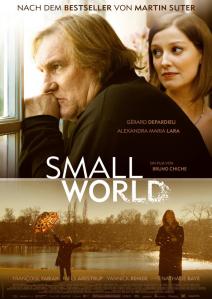 I doubt that Alzheimer’s really works that way, that as you lose your memory of more recent events, you remember things from your childhood you’d already forgotten. But then again, I’m no specialist and I might be really off about this.

Whether it really is like this or not, Gérard Depardieu does a wonderful job regressing to a childlike-state. In the end you have no problem believing that he is mentally a four-year-old, even though he still looks like Gérard Depardieu. But the rest of the cast is good, too, just not as spectacular. 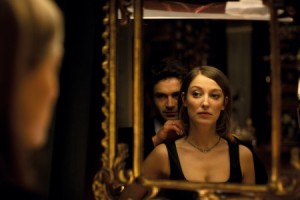 Unfortunately the rest of the film can’t keep up with the cast. The story is a little overwrought, with every cliché of rich families milked to death. And I just have to say that I think the plot is generally a little unlikely. Though at least not impossible.

The weakest point of the film was Bruno Chiche. He’s not a very strong director and sometimes the camera work annoyed the hell out of me. And the script – which he adapted as well – wasn’t that good, either. It might have been the translation, but the dialogues sounded a little stilted (which would have been even more grating if the cast hadn’t been that good).

Summarising: Worth a wach, though not a must-see.

*Nathalie Baye looks very much like Alan Rickman. Are they somehow related?