Plot:
Therea are 187 women working in the Ford factory in Dagenham, sewing together car seats. Their work environment is pretty crappy which is why they’re considering a strike. It is more by coincidence that Rita O’Grady (Sally Hawkins) gets involved, but when she does, she challenges not only the working conditions and payment but soon heads a nationwide protest for women’s rights and equal pay.

Made in Dagenham is a very enjoyable little film with great performances and a nice sense of humor. Not to mention that it’s about an important and interesting topic, which it handles intelligently even if not in-depth. 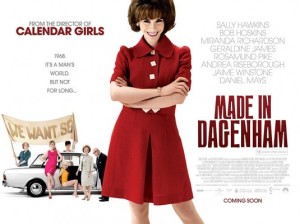 Sally Hawkins is amazing. She’s such a brilliant, talented actress; it’s just a joy to watch her. Especially when she’s joined by a strong supporting cast, as she’s here. Bob Hoskins is great, as are Miranda Richardson and Richard Schiff. Rosamund Pike is mostly tragic and beautiful, but I found Geraldine James to be especially impressive.

The narrative was very well done, making a fictional account out of real occurrences that makes the plot flow more smoothly than it probably would have otherwise.

There is one scene where Rita’s husband Eddie (Daniel Mays) confronts her about missing so much time with the strike and not the family, even though he treats her so well: he doesn’t sleep around, he doesn’t hit her or the kids. And Rita looks at him and says, “that is as it should be! It’s rights, not privileges.” And it’s such a simple thing and it’s very sad that it’s still not in our heads but I just wanted to stand up and start clapping when she said that.

I think that this scene represents the whole film very well: It doesn’t do anything groundbreaking but it does the basics well, with a lot of heart, a perfect lead and great entertainment value.