Plot:
Kath (Carey Mulligan) watches Tommy (Andrew Garfield) go in for his probably final donation and uses this time to reflect upon her life: How she grew up at Hailsham together with Tommy and Ruth (Keira Knightley), slowly discovering and coming to terms with the path chosen for her by her mere existence: she like all the other children at Hailsham is a clone, built for donating her organs and ultimately her life.

Never Let Me Go is an excellent adaptation, though it doesn’t manage to be quite as good as the book. Which probably wouldn’t have been possible anyway. But with a brilliant cast, wonderful soundtrack and very nice cinematography it has everything you need. 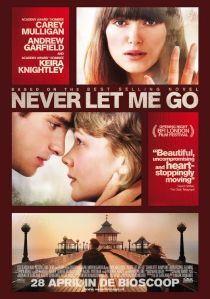 They made a few changes to the book which I didn’t quite understand – opening with Tommy’s last donation, for example, or suddenly making being a carer a voluntary thing for donors (which just doesn’t make as much sense). There were other changes that I did understand: The complexity of Ruth’s and Kath’s relationship and Ruth in general was whittled down as it would have otherwise taken up the whole film. Unfortunately that still hurt the film a bit, especially since it made Tommy a pinball without any will whatsoever because you can’t really understand why he’d stay with Ruth for so long. And the ending was a bit sappy.

But those are my only complaints about the film – and that’s a very short list and none of those things are really grievously harmful. The rest of the film is really very well done.

The cast is great – especially Carey Mulligan and Andrew Garfield (despite the fact that with the short hair he looks a whole damn lot like my brother which was distracting to say the least). Sally Hawkins is always good to see. And Andrea Riseborough and Domhnall Gleeson have this one scene together that really sent shivers up and done my spine. It’s amazing.

I also quite liked Rachel Portman‘s music. Generally, the atmosphere of the film matched the book very well. Which means that it’s quite a cry-fest – but in a very good way.