Plot:
Towards the end of the Civil War, the dead start to rise and throw the US into ruin. Edward Young (Mark Gibson) returns home to find his wife (un)dead and his son missing. He searches for his son, but in the end, can only save him from being a zombie. Otherwise at a complete loss, he decides to take the ashes of his son to the other end of the US, to a place they talked about before. Of course, a cross-country teck through a zombie-infested area is not easily done.

I had high hopes for this film – I just love the concept of historical zombies. Unfortunately, the movie really is boring beyond compare. It is astonishing how boring a movie can be, really. 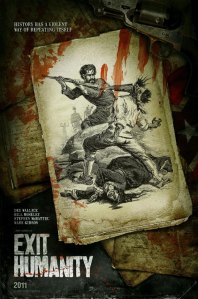 The movie has two main problems: One, the script is really, really, really bad. The dialogues are wooden, I assume because John Geddes tried to make it sound historically accurate. But it just sounded incredibly swollen and wrong (not that I’m a huge expert on 19th century English). Though not one piece of dialogue was as annoying, sanctimonious or forced deep as the entire voice-over (done by Brian Cox). Because that was just so damn awful that I don’t even have words for it.

The second big problem was the zombie action. Or rather, the lack of zombie action. Whenever a big fight scene was coming there was some fast forwarding, then some rather crude (if nicely looking) animation and then we jumped to after the fights. Sorry, though that might be an artsy way to avoid a bigger budget, it just just doesn’t cut it. Especially since the zombies actually looked really cool.

The whole thing became so jarring that I was annoyed any time Mark Gibson started to breathe a little harder. And since he was contiously exerting himself that was about 90% of the time.

It didn’t help that there were no decent female characters in the film either, though Dee Wallace gives it her best shot and that the plot didn’t make much sense.

I probably would have walked out of the film after 30 minutes or so, if my usual defence mechanism hadn’t kicked in and I hadn’t fallen asleep.