So, for the final entry about the /slash Filmfestival this year (well, at least until their Christmas Special which will most likely be on December 15, so save the date), I thought that I’d give you a round-up of all the short films they showed. After that, this blog returns to its normal state with one post a day that won’t necessarily be about a horror film while I’m busy raking in new material at the Viennale. :)
In any case, buying the /slash pass was one of the best acquisitions ever. I managed to sit in every film and I only fell asleep in a few of them. So, it was completely worth it.
Anyway, on to the short films!

They showed the short films of Brian Lonano, the “Ölfilm-Zyklus” (Oilfilm Cycle) by a group of young Austrian film makers, The Unliving and Roid Rage.

Attackazoids! is very weird and wasn’t really my thing. But Attackazoids, Deploy! was great and very funny. 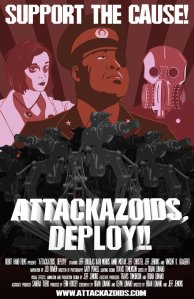 Brobot was probably my favorite of the Lonano movies. It was really very funny and makes the best of the lack of budget or acting talent with a whole lot of humor and brilliant writing. Loved it.

Martian Precursor
Written and directed by Brian and Kevin Lonano
You can watch it online.

Was not my cup of tea.

If Brobot was my favorite, 8bit Ghost Hop was definitely my second favorite. It’s really funny.

Electrical Skeletal
Directed by Brian Lonano
Written by Kevin Lonano
You can watch it online.

Electrical Skeletal was basically a music video. It was a little too loud but it was quite funny.

Where Electrical Skeletal was almost a music video, Casket Climber Insect God definitely was. But it didn’t work for me.

Scheißtag (Crap Day)
Two guys meet in a bathroom. Through their conversation you discover that the world has been taken over by ants.
At first I was a bit flabbergasted and just wondered what the hell was going on. But the movie kind of grows on you and despite that the acting is not great, the editing is not great und the quality of the film material is really not great, it ends up really, really funny.

Paradise Frost
The story of Future Duke the Cowboy who finds a talking lobster can which leads him on an adventure.
I just loved Paradise Frost. It was absolutely brilliant. Funny, a little nonsensical and it ends with the best fairy ever.

Romius & Chulio
A variation of Romeo and Juliet where the dialogues are entirely made from Friday the 13th quotes, read off of sheets of paper.
The whole thing is quite a surreal experience and it doesn’t really make sense, at least not all of the time. But I again laughed my ass off and the costumes alone are completely worth the experience.

Blaues Gras (Blue Grass)
An epic search for a mythical object.
This is probably the most surreal of the four movies, but it was again very funny.

Plot:
30 years after the zombie outbreak, people have gotten used to the shambling masses and are even using them as sources of cheap labor. Katrin catches the zombies, while her boyfriend Mark is one of the workers to program the zombies by lobotomy.

The Unliving shows a slice of everyday live after the apocalypse. That’s a cool idea and makes for an excellent moody film. I liked Katrin’s and Mark’s relationship, though it was a bit too “First period of love”-y for me sometimes. The pretty dystopian politics are interesting, though not much more than backdrop, just like the muted colors. Wonderful. 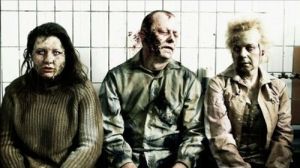 Plot:
What Sammy (Zach Canfield) thought was just a particularly nasty and persistent case of hemorrhoids turns out to actually be a mutation of a hemorrhoid that revels in killing people.

The general premise of the movie is pretty funny but I feel like the movie rests too much on the premise and ends up not funny enough, but too disgusting. Parts of it are absolutely brilliant, but generally it’s not my thing.

4 thoughts on “Short Films at the /slash Filmfestival”