Plot:
After the death of her mother, Maddy (Danielle Panabaker) and her stepdad Chet (David Koechner) inherited the family’s waterpark. Unfortunately for Maddy, Chet owns 51% and has very specific plans for the park (they mostly include boobs and parties). But right before the opening, with star guest David Hasselhoff (David Hasselhoff), Maddy’s friend is attacked by piranhas in a nearby lake. Maddy worries that the fish will find their way into the park. But nobody takes her seriously.

By no means is Piranha 3DD a good film. But watching it during a film festival in a sold out cinema that greeted you with David Hasselhoff songs to get you in the mood and with a cup of vodka, graciously given by a fellow festival-goer, in hand, it was an absolutely glorious experience. 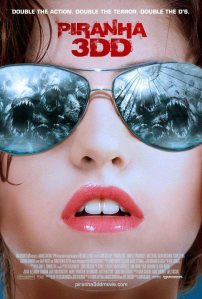 Settings are always important and while I did have the perfect setting for watching this film, it would have still be doomed to failure if the movie had been anything else but it was, namely completely self-aware. Piranha 3DD knows exactly that it’s a crappy movie which has to entertain by showing gore, boobs and stupidly-hilarious one-liners. And it doesn’t even pretend to have a logical explanation for any of it. You want to show boobs in slow motion? There doesn’t actually need to be a plot reason for that. Just go ahead and do it.

Of course it’s sexist. Of course it’s objectification. But I kinda have to honor the directness with which they go about it. It’s still offensive, but at least this way I could laugh about it. A lot. 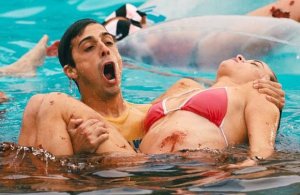 The actual gore effects were a little underwhelming, but it wasn’t really important.

Much more important were the special guests. Christopher Lloyd was great, as were Gary Busey and Ving Rhames. But it was David Hasselhoff who really stole bot only the scenes he was in, but the entire film. He and the entire film were winking so hard when it came to his role that you’d suspect them having a stroke under different circumstances.

Summarising: even though it is actually abysmal, it was extremely funny.