Plot:
Maya (Jessica Chastain) works for the CIA and has just been sent to Pakistan. Her mission is to find out where Osama bin Laden is hiding. A mission that takes her from torturing prisoners under the the tutelage of colleauge Dan (Jason Clarke) to plain old research. When she stumbles across the name of a guy she believes is a close collaborator of bin Laden, she becomes obsessed with finding him as the most direct way to bin Laden himself.

I really did my best to be interested in this film. Admittedly, the topic is not so much my cup of tea, but it is important. Unfortunately the movie is so very boring that, with the best of motivation, it was impossible to keep up the interest. I mean, I know they searched for this guy a very long time – but was it really necessary that the audience feels every minute of that 10-year-search? At some point I just gave up and fell asleep for a little while – just to get away from the boredom of it all for a bit.

And that’s pretty much it what I liked about the film. If you don’t count that I think that the glorification of torture that supposedly happens in this film is greatly exaggerated. Anybody who thinks that what they’re doing there is in any way, shape or form appropriate hasn’t been watching. Plus, they never actually get any valid info from the torture itself. All the info they get from the prisoners, they get after they finally stop torturing them. Yes, they could have made more of a stance against torture in general. But it certainly isn’t a stance for. 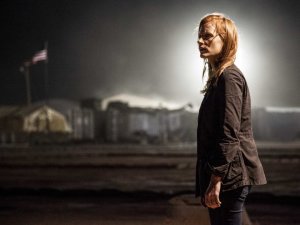 Anyway. The fact of the matter remains that this movie is freaking years long and I thought it impossible to stay interested in it beyond the first hour or so. And then the last act of the film, where they show the raid of bin Laden’s house in all detail and (apparent?) real time, goes on and on and on and on and just won’t end and it’s still going and yeah, they shot the guy, but that doesn’t mean we have to end this scene. That just cost me my last bit of nerve and the last remains of positive feeling towards this film.

Maybe if it had been an hour shorter. Maybe if the script had been less of a jumble. Maybe if I was generally more interested in this stuff. Maybe then I would have liked the film. But I really doubt it.