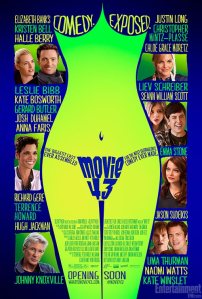 The Thread is actually the perfect framing device for this film. It is juvenile, nonsensical, has a surprising amount of incest and misogyny and isn’t funny in the least. Just like the rest of the film.

The Catch: Hugh Jackman and Kate Winslet on a date. Whatever could go wrong with that, even if he has a scrotum dangling from his chin? Well, it’s just not very funny. But at least it was one of the least offensive skits. So, yay?

Homeschooled: I really liked the idea of this bit – Liev Schreiber and Naomi Watts homeschooling their son (Jeremy Allen White) and including all the high-school bullying in their curriculum. Unfortunately it goes nowhere but, again, in the incest direction. And I would have appreciated to get to laugh. I didn’t.

The Proposition: He (Chris Pratt) wants to propose. She (Anna Faris) wants him to shit on her. Apparently that’s not hilarious enough (I agree) because he has to make it happen by eating tons of Mexican food and drinking a laxative and then pretty much exploding. *sigh* [And I do think that anybody who is actually into coprophilia will be severely insulted by this.] 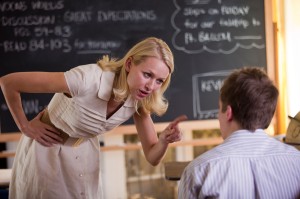 Veronica: This one was so close to being actually something good, it was probably the best segment (apart from Machine Kids). It, too, goes a little overboard and lacks really big laughs, but it’s so close!
[On a sidenote, why do I have such a difficult time telling Rory and Kieran Culkin apart?]

iBabe: Gah! An iPod that looks like a naked woman, including a vagina but in said vagina is a penis-mangling ventilation fan. Where should I start with the offensive, misogynistic clusterfuck that is this sketch? And just because you have a woman (Kate Bosworth) in the skit who is aware of the misogyny doesn’t make it any less offensive.
[On another sidenote: According to wikipedia, Richard Gere tried to get out of this project. I respect him for that. Colin Farrell actually did get out of it. I respect him more. George Clooney told them all to fuck off and didn’t get in in the first place. I respect him the most.]

Superhero Speed Dating: Robin (Justin Long) tries speed dating, interrupted by Batman (Jason Sudeikis) in full-on asshole mode. The “superheroes being dicks” thing is a bit overworked at the moment. But even if it wasn’t, this sketch would still be just not funny. And offensive. People being assholes is just not funny on its own. I’d love to see a movie with John Hodgman as The Penguin though.

Machine Kids: The actual best thing about this film and it’s only a minute long (or so). Don’t mistreat machines: remember, there’s kids inside them. I honestly laughed. 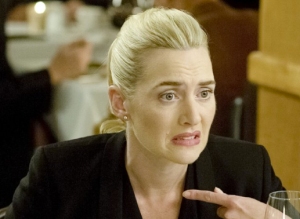 Middleschool Date: This segment has one delicious moment where Chloe Moretz (playing a girl who just got her period for the first time while at her boyfriend’s house, surrounded by guys who are freaking out) tells all the panicking men around her to just shut the fuck up and get over it (I’m paraphrasing). But that “men freaking out over period, not knowing what to do” is an actual plot is ridiculous.

Tampax: A fake commercial where a woman gets eaten by a shark because she didn’t use the right tampon and therefore wasn’t sealed tight. I admit it, I laughed.

Happy Birthday: Guys being guys. Which, according to this, means: misogyny, beating each other up, cursing and more misogyny. Fuck off is what I say to that.

Truth or Dare: A couple on a blind date give each other increasingly stupid dares. Starting with fondling an uninvolved third party, and it only goes downhill from there to end in actual racism. No. 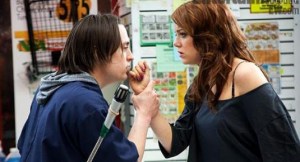 Victory’s Glory: A trainer (Terrence Howard) gives his basketball team the speech “you’re going to win because you’re black.” And because it’s a black dude who makes that speech and all the white guys are racists, too, it is funny. Or not. At least there’s also Brett Davern.

Summarising: Stay as far away as you possibly can.