Plot:
On the surface Lisa (Abigail Breslin) has a normal life with her parents (Peter Outerbridge, Michelle Nolden) and her brother (Peter DaCunha). But actually they all died years ago and have been reliving the same Sunday ever since. Only Lisa finally woke up and noticed the repetition. And with that, shadows start to appear, voices can be heard and things become more and more off. And through all that, Lisa finds a connection to other girls.

Haunter wasn’t always perfectly logical but I thought that the concept was interesting, the movie atmospheric and I was generally entertained.

Abigail Breslin practically has to carry the entire movie on her shoulders – she’s in all the scenes and most of the time, the movie is focused on her. I thought she did so perfectly. From sullen teenager who is just annoyed with everything, to scared little girl to heroine – it’s all there and it all works.

As I said, I did like the concept a whole lot, too. [SPOILERS] That a murderer would be able to keep ahold of his victims even in the afterlife, effectively trapping them for his own amusement, is a pretty dark take on death and I loved it. [/SPOILERS] And the movie just goes ahead and plays the entire thing straight. There’s no “are they alive or are they dead” mystery. As soon as Lisa has the facts together, there are no more discoveries that change the story, there’s just trying to figure out what to do with the hand that’s dealt.

Generally the movie was very atmospheric and moody (it was only slightly disturbed by the incredibly fake fog). There were some very creepy moments there as well. I enjoyed that.

What I enjoyed less were the gaps in the movie’s logic and the ending that isn’t quite as happy as it thinks it is, but is even cheesier than your average soap opera. But in this case I thought that both were forgivable offences. 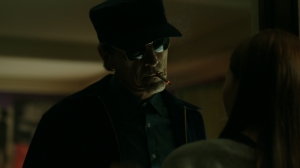 Summarizing: Quite a step up again from Splice, Mr. Natali.