Plot:
Jiro (Hideaki Anno) loves airplanes. He would like to fly one, but unfortunately his eyesight is too bad to become a pilot. Instead he decides to become a plane designer, after designer Giovanni Battista Caproni (Mansai Nomura) speaks to him in a dream. Years later his dream is coming true, but World War 2 is also on the horizon, which poses the question whether it is ethical to design war planes.

I was really excited for a new Miyazaki film, despite the fact that Ponyo wasn’t all that good. I was hoping that the chiefly positive reviews were right. I’m sorry to say that I was really disappointed though. Maybe he really should have quit already.

The Wind Rises looks beautiful and Joe Hisaishi‘s soundtrack is wonderful, as it usually is. But both of those things aren’t enough to carry the film and unfortunately there isn’t much else that I liked about it.

Jiro’s love story with Naoko was shown as this huge romantic thing, but I couldn’t find much romance in keeping Naoko from returning to the sanatorium where her tuberculosis was at least a little better because they can’t stand to be apart from each other – and then Jiro is never freaking home anyway, not even when she actually dies. Much romantic. Very love. (And that is not even mentioning how freaking uncomfortable it made me when they set the beginning of this epic love story in Naoko’s childhood.) 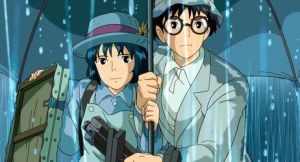 Jiro’s plane might have been a great technological achievement, but you know, it meant that people could throw bombs better at other people. I do not agree, as the movie puts it, that the beauty of these planes excuses the atrocities committed with them and since Jiro just wanted to make something beautiful, no matter the consequences, he was some kind of naive, innocent romantic. [According to wikipedia – I’m sorry, I did not do more research – the planes were even built with forced laborers, so yay.]

Quite apart from all political qualms I had with the film, The Magic Mountain-ish sanatorium scenes and the weird appearance and then disappearance again of Castorp was jarring and felt liked it belonged to another film. The film generally wouldn’t come together for me and ended up being boring more than anything else.

Summarizing: Skip it. Watch his old stuff (again) instead.