Im Keller is a highly stylized documentary that is sad and weird and funny and uncomfortable in turn. It is an impressive display that I’ll surely remember for quite some time.

There are four, five basements that are the main focus of Seidl’s film, but cut in between are shorter impressions of other basements he filmed, almost photographs of those scenes with the people the basement belongs to looking straight into the camera. Those images contribute a lot to the general mood of the film and especially the one below with the three women and the washing machines is perfectly compositioned and immediately burned itself into my brain. Sometimes it does go on a little too long though, so that you barely know where to look anymore (which might be the intended effect, I don’t know).

Of the basements he focuses more on, three were actually in the BDSM subculture. (I feel like that was supposed to shock me but for that, I was a little too much in the internet already, I’m afraid.) I did find the frankness interesting though, with which the people involved talked about it. I’m sure that the woman who talked about liking to be spanked and, being an abuse survivor herself, works with abused women, will get a lot of shit for that at her workplace from people who don’t understand the difference between consensual sexual practices and abuse. I was also impressed by the mistress who lives with her “marriage slave” and who clearly, succinctly and intelligently explained how their relationship works and that is beneficial to the both of them.

It also becomes quickly apparent that Austria is far from done with its past. Whether it’s the blatant display of adoration like in the Nazi basement (which has caused a bit of an uproar here, including the resignation of two politicians who were filmed drinking in that basement) – its owner tearfully telling the camera that the Hitler portrait was the best wedding present he ever got – or the xenophobic/racist discussions in the shooting range – where the least offensive statement was that muslims still have centuries of catching up to do with “western” culture – or the hunter who regularly goes to Africa to enact all his colonial fantasies.

There is certainly voyeurism involved when you’re watching this documentary. And – untypically for a documentary – some of the things seen are more fiction than reality. But there is truth to be found here, if you dig a little deeper into this film just as Seidl dug a little deeper under the representative layer of Austrian houses. 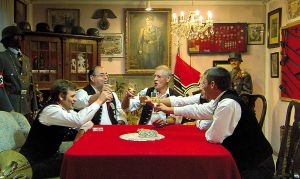 Summarizing: Interesting and entertaining. I liked it.