Plot:
Joe (Ryan Kwanten) was just dumped by his girlfriend Beth (Margarita Levieva) which is why his geeky friends Eric (Steve Zahn) and Hung (Peter Dinklage) drag him off to a LARP. Joe enjoyed playing Dungeons and Dragons a while ago, but he is hesitant about LARPing. It doesn’t help either when it turns out that Eric actually summoned a very real and very murderous demon – and it’s up to them to stop it.

I expected this film to be an ode to LARPing with maybe a bit of friendly ribbing at the idiosyncracies of that particular subculture. But unfortunately Knigths of Badassdom doesn’t laugh with LARPers, it laughs at them – and it isn’t actually very funny.

The film started out nice enough. The first scene of LARPing that falls apart a bit, Joe’s metal “concert” [I’m not much of a metalhead myself, but the film did for metal what I thought it would do for LARPing: shows appreciation while poking a bit of fun at it. It’s no surprise that in the end, metal saves the day and not LARPing skills], the way he wakes at the LARP itself – it was funny. But the film quickly loses its charm after that, especially if you think that LARPers aren’t completely stupid.

It starts with the treatment of women: Summer Glau doesn’t play a character, she plays a wank-fantasy par excellence who doesn’t mind when she’s completely objectified but joins into the rating of her ass. Beth breaks up with Joe because he just isn’t succesful enough and we all know what ambitious bitches women are. That the demon then takes on her form felt contrived in the first place and adds another layer of misogyny that was quite unnecessary (at least I enjoyed Margarita Levieva’s performance). 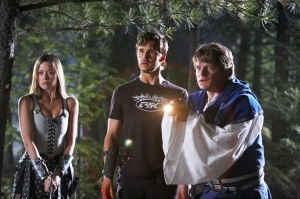 But the sexism wasn’t the worst thing (and honestly, I’ve seen way more sexist films). Neither were the much too short appearances by both Danny Pudi and Peter Dinklage. What bothered me most of all was the unfriendliness with which LARPers were treated. Most of them end up dead, none of their LARPing experience an actual help for defeating the demon (which I thought would be the way things would go). Instead LARPing causes the demon and, as I said, metal music defeated it.

The film wasn’t completely offensive (even if my review might seem that way). There were some nice moments and some good laughs. But it could have been so much better than it was – it was just a huge disappointment.