Plot:
Raymond (Matthew Gray Gubler) has a business degree, but he can’t find a job. His situation is so dire that he has to move back in with his parents. Trapped in Suburbia with a father (Ray Wise) who hates him (and vice versa) and a mother (Barbara Niven) who still treats him like a child, is not really his dream situation. When he starts to see ghosts again, like he used to do when he was a kid, at least he has something to drink about with bartender Becca (Kat Dennings).

Suburban Gothic is a weird animal with a very strange sense of humor that borders on the surreal but doesn’t quite go there. If you find your way into that humor zone, you’ll love the film. But if you expect to see a film like Excision, you’ll be disappointed.

Richard Bates Jr. delivered an astounding debut with Excision which is why every review of one of his films will probably drag it up from now until eternity. How could I miss that trend? In any case, Suburban Gothic shares nothing with Excision but the vibrant bubble gum color scheme. That will leave a lot of people disappointed, I’m sure, but personally I applaud Bates Jr. to go in a completely different direction for his follow-up film. A direction I enjoyed no less, albeit in a very different way, than Excision.

Matthew Gray Gubler and Kat Dennings make a great pair of protagonists, especially because they’re so amazingly different. Their contrasting personalities and styles really give the film life (and talking about styles, the costumes Gubler wore were almost entertaining enough on their own to carry the film). The supporting cast – from Ray Wise to Jack Plotnick (who seems to only play in films with a really weird sense of humor) plus all the various cameos – was wonderful, too.

I liked how the plot developed, even though it wasn’t the most difficult, thoughtful plot ever created. There could have been a bit more character development to match it but it didn’t actually bother me while watching the film.

There was a certain quality to it where things are just accepted without much questioning or judgment by most characters (in fact, Donald, the father, was practically the big bad of the film because he was so judgmental). That means sex work (and its consumption) is just as much a fact that doesn’t need to be hidden (leading to a hilarious conversation), as the supernatural doesn’t need to be doubted. So, you say you see ghosts? Alright, what do we do now? It was interesting and very fun to get this in such a lighthearted manner and it’s ultimately what made the film and its offbeat humor work for me. 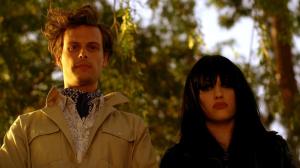