Plot:
Owen (Adrian Grenier) has been estranged from his family and hasn’t been home in a long time. Now his girlfriend Isabelle (Angela Trimbur) is pregnant, she feels it’s important that Owen makes peace with his past. Reluctantly Owen agrees to bring Isabelle home to his grandmother Violet (Fionnula Flanagan) and his sister (AnnaLynne McCord) who was badly burned in a fire that killed their parents. Despite Owen’s warnings, though, Isabelle is completely unprepared for how awful Violet is. But she’s not one to give up easily.

Trash Fire is an appropriately trashy comedy with great dialogues and an even better cast. I thought it was fantastic. 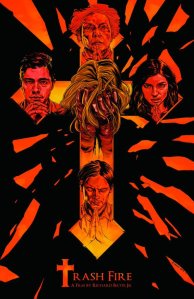 Trash Fire takes a bit to get started, especially because Owen seems like such an asshole in the beginning, I couldn’t stand him. Thankfully as the film progresses, he loses most of his douchiness and actually grows on you.

That’s also due to the wonderful sense of humor and the funny dialogues that accompany him throughout the film. Honestly, a film that pulls of “beige earthworm” as an insult can hardly go wrong in my book. And when those dialogues are as well-delivered by a stellar cast as they are here, I’m all there for it as well. Especially Fionnula Flanagan was simply outstanding.

Add to that a surprising ending and an absolutely fantastic soundtrack filled with female artists, and the film is an absolute winner in my book, although I was a little sad that Matthew Gray Gubler has only a small role (he’s just the perfect fit for the film’s sense of humor).

While people may be disappointed that Trash Fire doesn’t quite carry the same punch as Excision, I was perfectly satisfied with the charming and entertaining comedy Trash Fire turned out to be (much like Suburban Gothic was). 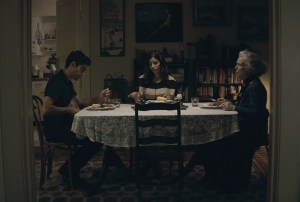 Summarizing: For fans of the absurd.