Plot:
Takao (Miyu Irino) has a deal with himself: on rainy days he skips the first hour of school and goes to the park, sketches shoes and dreams of becoming a shoemaker. One day he finds Yukino (Kana Hanazawa) in his favorite spot, drinking beer and eating chocolate. He is immediately intrigued by the older woman. When they start to meet regularly whenever it rains, they slowly, carefully become something like friends.

Garden of Words is a visually stunning film with a nice and touching story. I had my hesitations in the beginning of the film but by the end I loved it.

I already found Shinkai’s last film Children Who Chase Lost Voices from Deep Below to be exceptionally beautiful and this one might be even more stunning than that one. One gorgeous shot comes after the other and you barely know which detail to focus on first.

But visuals aren’t the only thing the film does beautifully. I really enjoyed the story, too, even though I had to wait until the very resolution to really do so. Around the halfway-mark of the film it is revealed that Yukino is a teacher at Takao’s school who had to take a break after a nervous breakdown of some kind. Takao is very much in love with her by then and I kept waiting for the story to become really creepy and have Yukino reciprocate (15-year-old) Takao’s love. But it never happened. Yukino honestly cares about him and who knows what might happen in the next years when he’s more grown up and she is healthier, but at this point, they were good for each other as friends and nothing more should have happened. 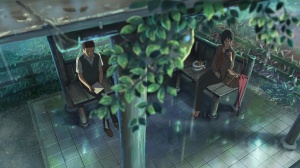 I would have wished for a little more clarity when it comes to Yukino, though. I didn’t realize that she had problems with her feet until very late in the film and by this point the film treated it very much as established fact. A little more elaboration regarding her issues wouldn’t have hurt the film either.

But generally both Takao and Yukino were well-realized and well-rounded characters with clear motivations that made it easy to see what both had to gain from their relationship with each other. That dependence on each other was wonderful to watch.