Plot:
Many years ago, Anne Elliot (Amanda Root) was engaged to Frederick Wentworth (Ciarán Hinds), but took the advice of her motherly friend Lady Russell (Susan Fleetwood), as well as listened to the opinions of her father Sir Walter (Corin Redgrave) and her sister Elizabeth (Phoebe Nicholls) and dissolved the engagement since Wentworth didn’t have much standing. Quite by coincidence Frederick is back in her life after years in the Navy and has made a name for himself as well as a fortune. Anne is convinced, though, that he will never forgive her for her past actions. And when her cousin William Elliot (Samuel West) starts courting her, she might be getting another chance, despite being alread 27 years old and still unmarried.

Persuasion was so incredibly nice, I almost burned the cake that I was baking while watching it because I couldn’t bear to leave Anne and Frederick. 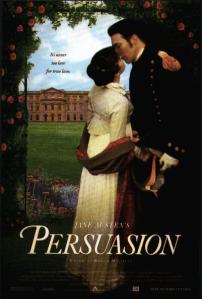 Nick Dear managed an extremely faithful, albeit shortened adaptation of Austen’s novel that completely captured the novel’s spirit and nicely emphasized its feminism (it’s hard to believe that this comes from the same person who wrote the Frankenstein script that is really awful to its women).

Michell takes that script and gives it the perfect atmosphere and surrounding so that I, despite having only recently read the novel and knowing exactly what would happen, was completely into it again. There might have been sighing, a couple of tears and incessant grinning, but I admit to nothing.

Ciarán Hinds and Amanda Root were really wonderful in their respective roles. For one, they had amazing chemistry. And two, both of them are actors perfectly capable of expressing complex emotions with only a few glances and gestures, making them absolutely perfect for the story.

The only thing that didn’t completely work for me was the liberal use of public displays of affection that felt a little off for the society at the time. I don’t think that making out on the street would have happened in such respectable circles (I could be wrong, though). In any case that is far from enough to really mar the film. It’s just wonderful.

Summarizing: Loved it. SO MUCH.