Plot:
Reed (Miles Teller) has been working on a teleporting device ever since he was a kid. With the help of his friend Ben (Jamie Bell), he has even some success to show for it. But nobody takes his attempts seriously – until Dr. Storm (Reg E. Cathey) comes to his science fair to recruit Reed for his secret interplanetary travel project. Also working on that project: Storm’s daughter Sue (Kate Mara), his son Johnny (Michael B. Jordan) who otherwise would only engage in high risk behavior, and finally the volatile but brilliant Victor (Toby Kebbell). Within a short amount of time, the four of them manage to establish a connection to a planet and in a clandestine nightly operation, the guys invite Ben along and the four of them give it a go. But from that trip, Victor doesn’t return at all, and Reed, Ben, Johnny and even Sue who got them back, end up changed beyond belief.

I had heard bad things about Fantastic Four before seeing it, as did probably everybody else on the planet. So my expectations were low, but I decided to give it a chance anyway, thinking that maybe there was some mob mentality going on and maybe the film isn’t quite as bad as hyped. But I should have believed all those negative reviews. And I should have brought alcohol. Because Fantastic Four is an astoundingly bad film. 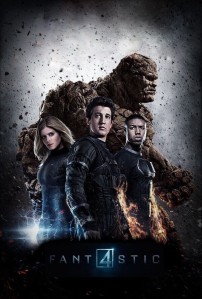 Fantastic Four is a film about how a team comes together with no sensibility for or understanding of its characters and their relationships with each other. I don’t know if I should find that level of incompetence annoying or just plain tragic. But the fact remains that Fantastic Four would rather thrust a random jealousy drama in the group that never goes anywhere than to explore the characters.

Add to that the just completely baffling plot decisions – only Reed getting offered the scholarship even though he and Ben built the transporter together; the guys calling Ben as the fourth passenger and leaving Sue behind, who worked her ass off alongside them (why not just build a teleporter with five seats, movie?); Victor coming back to earth in the first place or Storm refusing to let Victor go back to his planet peacefully; making a one-year jump in the story just when the shit hit the fan. And the list goes on.

Normally I wouldn’t demand a character focus from a superhero movie (though the better superhero movies are character pieces with some action scenes), but for the first hour or so of the film, nothing happens but a character set-up, no matter how dilettantishly handled. There’s no action to speak of at first and since the character introduction and development doesn’t work one bit, everything is boring.

Once they do get around to the action bits though, the film doesn’t get more exciting, or smarter, and it looks like shit. I couldn’t even laugh about it anymore because I felt frozen by the sheer dullness and drudgery of the film. Also, I didn’t have enough alcohol to put on beer goggles and drink the film nice. All I could do was lament the life force that was being sucked out of me and the two hours of my life that I will never get back.

Summarizing: Burn it with fire.