Plot:
Ed (Dean Cates) worries about his brother Martin (Brian Morvant). Martin has a history of mental illness and has been living alone in a remote vacation home that belongs to the family. And now, Martin has left a weird message for Ed and can’t really be reached anymore. So Ed picks up their sister Lyla (Lauren Ashley Carter) and they drive up there together, despite a more than tense relationship. But what they find there seems to be more than a psychotic break.

Pod was one hell of a crappy film. I could really find no redeeming feature there whatsoever.

I don’t even know where to start, but the characters are probably as good a place as any. Not only are the dialogues bad, I can’t recall a single film where I hated the characters as much as I did here. All of them, without exception. I’m usually not one to cheer for character deaths on screen, especially not of its characters that I’m supposed to sympathize with, but here I felt like doing a little happy dance every time one of them croaked. That’s how much I hated them.

It also doesn’t help that the acting was wooden at best (with the exception of Brian Morvant who mananages to wrangle something from his role); that Lyla is reduced to screaming and being useless, which is at once sexist and annoying as fuck; or that I have rarely seen so much protagonist stupidity in one film – from completely disregarding light switches that can be plainly seen to almost all decisions in the entire film. 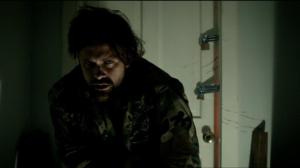 But the badness of the script doesn’t stop with the characters or the dialogues. There is also the plot to consider that is at the same time completely predictable and absolutely incomprehensible. I still don’t know where the Pod came from or what it’s for. Maybe I’m not supposed to know. If that’s the case Keating managed to irritate me more than invite me to speculate.

All of that crap is packaged into an atrociously boring film with some of the worst sound mixing ever (there were bits where everything was too loud and then the dialogues were so low I could barely hear them). I was just glad when it was over – which despite its short runtime felt like lightyears after the film started.