Plot:
Anne (Barbara Crampton) and Paul (Andrew Sensenig) have lost their son in a car accident and now they’re trying for a new start. They move to the country site into a new home. But weird things are happening in their home, their neighbors make strange insinuations and Anne feels like she can feel the presence of their dead son. She calls her friend May (Lisa Marie) and her husband Jacob (Larry Fessenden) to visit them, because May is a medium. But there seems to be somethign more to the town and the house than they thought at first.

We Are Still Here is a thoroughly enjoyable and rather unusual ghost story that I enjoyed a lot, even though some things did remain unclear to me. But that just means that I’ll have to rewatch the film – which I’ll gladly do. 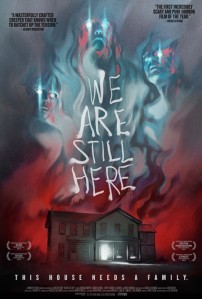 The first thing that makes this film different from what we usually get in horror movies is that Anne and Paul are a mature couple. The son they lost was in college, they are somewhere in their 40s, going on 50s, and their relationship is comfortably established. Usually these types of films will feature teenagers/young adults as protagonists and it was nice to have that changed for once. It was interesting to see how much that changes the dynamic of the film, its feeling and atmosphere. The world could do with more films like that.

Especially since I liked both Anne and Paul, but also May and Jacob, as couples, as (not always easy) friends and as individuals. Plus, Larry Fessenden was just plain hilarious as Jacob – that always helps.

But there is more to it than that: the creature design was great (both visually and accousically) and not something we’ve really seen before. It was also unusual in the combination of ghost story and absolutely gory finish – usually you get either/or, not both/and.

Geoghegan also has a nice handle on the tension and the pacing, which always keeps you engaged. Despite that, thought, I felt like I missed a part of the plot/explanation. Towards the end it became less and less clear to me who was killing whom to what end and in whose name. Apparently it’s about sacrifices, but details eluded me. Since I liked the film so much, though, I don’t mind watching it again to see if that clears things up. 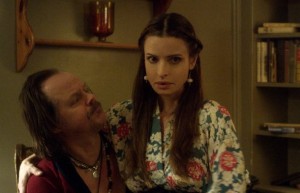