Plot:
Skeletor (Frank Langella) has taken over He-Man’s (Dolph Lundgren) world which is slowly falling to pieces. But Skeletor’s claim to fame can be halted if He-Man manages to break his hold on the throne of Castle Greyskull before the moon is properly aligned for the last transfer of power. But backed into a corner, He-Man has no choice but to flee through a portal opened by Gwildor’s (Billy Barty) cosmic key. Together with Duncan (John Cypher), Teela (Chelsea Field) and Gwildor himself, He-Man finds himself stranded on our earth and the cosmic key lost. Will he be able to return in time?

We used to love He-Man when we were children and we watched this film so often, my parents still quote “I HAVE THE POWER” at us. But it had been 20 years or so since I last watched the film, so I was extremely excited when I saw that it was included in the /slash’s program this year (preceded by a hilarious, if slighlty overlong, live enactment with action figures of one of the audio plays that were also produced in the franchise). But there was also a sense of trepidation there: how bad would it really be? How many of my fond memories are tainted by nostalgia and how much is actually fun?

It turns out, I need not have feared. While Masters of the Universe isn’t exactly a cinematic masterpiece, it is an extremely decent film, with a high entertainment factor and a lot of heart. 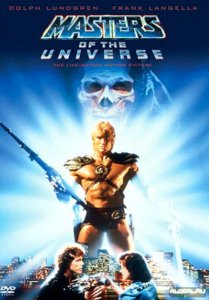 What I never noticed as a child btu what was completely obvious now was how much He-Man has stolen from the Star Wars franchise in general: the aesthetics, particularly when it comes to Skeletor and his army, are straight from the Death Star and even the soundtrack is cobbled together pieces from Star Wars and Superman. Don’t get me wrong, it’s a good soundtrack, but I kept flashing back to those films.

Many of the special effects have difficulties standing the test of time, among those He-Man’s skateboard flying (or whatever). But Skeletor’s mask is still an amazing effects achievement and impressed me all over again. Generally speaking, the practical effects are still great, while the CGI looks its age. 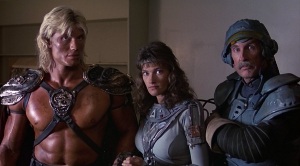 Another thing that didn’t stand the test of time so well was the copy of the film. I have probably mentioned it here before, but I really don’t get why people are happy about getting 35mm copies when perfectly fine digital copies are available. Our film role tore three times, the coloring was off and the flickering on screen isn’t exactly charming either. Give me a digitally crisp and smooth screening any time.

Be that as it may, I loved the film all over again. Even the parts that are slightly ridiculous and a little stupid. It still has enough magic in it to make me not worry about them. 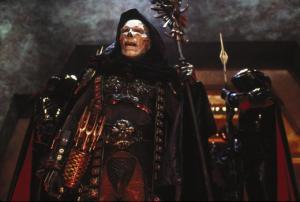