Plot:
The Thompson family’s regular babysitter can’t make it, so they get a replacement on short notice. The girl who introduces herself as Anna (Sarah Bolger) seems well-suited, but only as long as the parents are there. As soon as they’re gone, Jacob (Joshua Rush), the oldest kid, becomes suspicious. Something is going on with that babysitter. Her name isn’t even Anna, it’s Emelie. But what’s the game?

Emelie works well building up the suspense, but as soon as we get to the part were her motivations are being revealed, it completely falls apart. 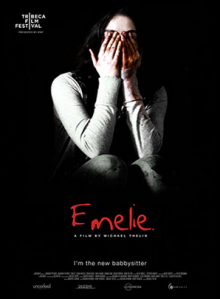 It turns out that Emelie lost her own child and that death made her go insane. Now she’s looking for a replacement child, but it has to be the right kid. So she takes the babysitter’s place at the Thompson’s to get to know the children and see whether the right one is among them (has she done this more than once? did she scope out the children before? how did she know about the change in babysitter? did she know which of the three children she wanted beforehand? These are only some of the questions that are never answered by the film).

She decides that the youngest son, Christopher (Thomas Bair) is the right one and plans to take off with him, killing the other two children. But before she decides that she wreaks havoc on the house and the children: she feeds Sally’s (Carly Adams) hamster to Jacob’s pet snake. She shows all three their parents’ sex tape. She destroys the house. And I just don’t get it. If her motivation is to get an ersatz child to love and cherish and be a mom to, why traumatize them first? Wouldn’t it be better if the transition whent smoothly and without a hitch?

And that’s not even getting into the ending, which was all kinds of stupid or the fact that we have yet another story where a woman completely loses it after losing her child. I don’t want to make light of such a loss, nor do I want to pretend that a tragedy like this might very well lead to mental health issues and trauma in both parents. But more often than not, we get films and stories about losing a child where the father manages somehow and the mother is completely unable to and unravels. It would be nice to get a film that has a mother dealing with the tragedy and her grief and not become a psychopath/complete wreck.

That being said, as long as the story didn’t go into explanations, I had fun guessing at what’s going on. Especially since all three children were cute and in particular the child actors did a really good job considering their young ages. So not all is lost in the film, but not enough is saved.