Plot:
Adam Hitchens (Joseph Mawle) is a woodsman tasked with assessing the forest in Ireland before it is being privatized. For that he, his wife Clare (Bojana Novakovic) and their baby son moved to a remote cottage in the middle of nowhere. Their only neighbor (Michael McElhatton) keeps telling them to leave and that they should stay away from the forest. What Adam takes as antagonism due to the sale, actually turns out to be an honest warning: there is something living in those woods and it has its own agenda.

The Hallow tells a classic story in a very good way. Especially the creature design was really awesome.

The Hallow mixes faerie mythology and science in a really exciting way (much like The Strain mixes vampire mythology and science – that is something I really appreciate). Taking its cue from the “zombie fungus” it creates a dark and aggressive fae folk that is out to get you, among other things because their ecosystem and world is slowly being destroyed.

And they do so looking astonishingly good, on two levels: the creature design is awesome and exciting and really creepy. Plus, apparently most, if not all, effects were mechanical and only very little was done with CGI and they obviously got very good people to do that, because they look fantastically realistic.

Since the movie also manages to mount the tension slowly but inexorably and effectively, boasts a good cast and has spot-on pacing, I had no problem whatsoever enjoying it, despite a few weaknesses that mostly come in the form of story inconsistencies or illogical choices (is it fire or light or both that hurt the fae? How can Adam carry that flaming scythe? Why don’t they just put a little bit of iron on their baby to see if it’s a changeling?).

While I did notice these things already while I was watching the film, they didn’t really bother me because I was too caught up with what was happening and rooting for the Hitchenses. I wish all debut feature films were this strong. 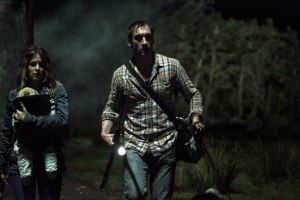