Plot:
Srebrna (Marta Mazurek) and Zwota (Michalina Oszanska) are sirens who decide to try their luck on land when they see a band at the shore. The band – consisting of singer (Kinga Preis), bass player (Jakub Gierszal) and percussionist (Andrzej Konopka) – help them ashore and bring them to the night club where they work. There, the siren sisters become great hits. But when Srebrna starts to fall for the bass player, things become dangerous for them.

The Lure is a strange film. Taking different mermaid/siren lore and combining it, transplating everything into modern day Polish night clubs and making a musical of it – there’s enough material for quite a few films. That being said, it didn’t entirely manage to blow me away. 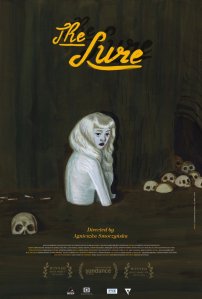 I think my favorite part of the film was the music in it. The songs are fun and burrow their way into the listeners’ brains. Especially as long as the focus is on Kinga Preis who has an absolutely magnetic presence and makes more of her role and the songs than I would have ever guessed.

I also enjoyed the matter of fact way the film deals with nudity and sex. The sirens are naked a lot and even though they are leered at by the people in the film and play a lot with their sex appeal, the movie itself didn’t really leer at them. At least that was my impression. Their breasts are there and yes, they’re naked, and yes, one of the first things that happens is that the night club owner fingers the vagina in their fishtail, but that’s all just part of how things go and not too much of a scandalized titillation (though that certainly plays part, I won’t deny that). 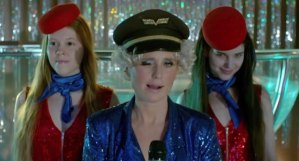 As I said, the film calls back to various mermaid/siren stories. The sisters here seem to be more of the classical sirens, singing to lure men into their thrall and kill them. But there’s also a little bit of Andersen plotting with unhappy love. And there is a mysterious guy who is credited as Tryton (Marcin Kowalczyk) who brings his very own taste to the story that doesn’t fit in easily with the other myths. I very much liked that mix and match approach.

But in the end, the film tried a little too hard to be edgy in its imagery and not enough to subvert the old tropes (that are very much problematic in quite a few regards). After a while that became a little stale. I believe that much more could have been made of it with a slightly more radical approach.

Summarizing: Worth seeing, but not amazing.