Plot:
A year after the assassination of John F. Kennedy (Caspar Phillipson), his widow Jackie Kennedy (Natalie Portman) gives an interview to a journalist (Billy Crudup) about the difficult path she had to navigate in the time since. Weighed down by her own shock and grief, she still has to make sure she upholds the Kennedy’s reputation and her own husband’s legacy.

Despite a great cast and a great look, Jackie did not work for me. It continuously bored me and I just could not get into the story, the film or the characters. 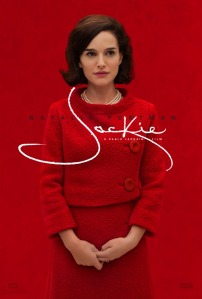 Throughout the entire film I kept trying to find some interest in me for what happened on-screen. Much like Neruda, I liked the general idea of the film and thought that the people in it are interesting, but the resulting film lost me in an apparently never-ending sea of boredom.

The only thing that certainly wasn’t boring was the soundtrack. The disharmonic grating of the violin theme was hard to stand. I am aware that this was the intended effect: Jackie Kennedy’s situation was hard to stand, it’s only fair that the audience should get to feel that as well. And I could appreciate that, but I thought that the soundtrack forced itself on the audience too much, it was too present.

It’s certainly an aesthetically pleasing film with great sets and even greater costumes. They also work with a cast that not only looks much like their real-life counterparts (as far as I know them), but delivered strong performances all the way through. As usual, Portman shines in everything she does and she manages to show both the calm and collected outer shell and the emotional turmoil within.

I still don’t understand, really, how they managed to make this story with that cast boring. But that was basically my only take-away of the film: this utter sense of empty boredom, albeit in a very pretty package. 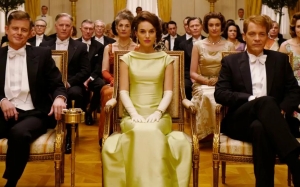