I know that Franco gets a lot of shit around the internet and a lot of it not undeservedly, but personally, I really enjoy him as an actor. At least when he has a strong director, he’s really good. Turns out that Franco is not a strong director, and so he wasn’t really good in this film. Part of the problem may also lie with me because he’s just so damn charming that I melt away whenever I see him, which is a problem when he’s supposed to play a cold asshole who just happens to be charismatic. Because I just realized that he was supposed to be cold because the characters around him kept calling him that, not because it was visible in his charming performance.

Fortunately, the rest of the cast is good enough to play their characters very well without needing Franco’s direction; or maybe he’s good at directing other people and just not himself. Either way, they deliver. 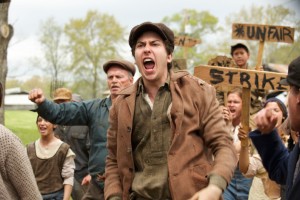 Apart from the acting there were a couple of inelegant solutions in both the script and the direction that make the film a little less smooth than it could and probably should be. But it was nothing that completely brought me out of the film. Fortunately Steinbeck is a strong writer to begin with who obviously (I haven’t actually read this novel) created a strong and interesting story with an interesting take on the situation. Knowing Steinbeck, it was probably perfectly researched, making it even more engaging.

The film takes on an important policital issue in a rather complex and sometimes a little ambivalent way. I think that we can use more stories like it.

Summarizing: Not great, but interesting.