Plot:
Professor Manfeldt (Klaus Pohl) has spent his life researching the moon. He has theorized that it has huge gold reserves that could be harvested for earth should space travel ever be achieved. But academia laughed him out of work and into poverty. Now the only one who still believes in him is Wolf Helius (Willy Fritsch). After a mysterious man (Fritz Rasp) shows up at Manfeldt’s, trying to steal his research and putting pressure on them all, things are set in motion to finally finish a rocket and fly to the moon together with Manfeldt, his best friend, engineer Windegger (Gustav von Wangenheim), scientist Friede Velten (Gerda Maurus) and the mysterious man.

When I saw Frau im Mond for the first time, I was pretty annoyed with the music that came with it. So getting the chance to see it with different music (and that music performed live) was a good thing and made the film better. 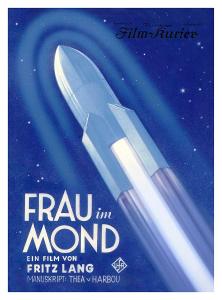 Frau im Mond is not a short film. With music I didn’t enjoy it felt even longer. With the music this time, it is still lengthy, but it doesn’t feel that long anymore. I could fall into the story much more that way and good music simply strengthens a film. Sometimes it actually makes the film, but there was enough in the images here that this wasn’t necessary.

I definitely found the film to be funnier this time. Both when they intended it to be and also sometimes when they didn’t intend it. For example, they have little leather straps in the rocket for the characters to put their feet into and to hold onto, because of course that’s the way to counteract zero gravity and make sure that people aren’t flying off. Which from today’s perspective just feels hopelessly naive. 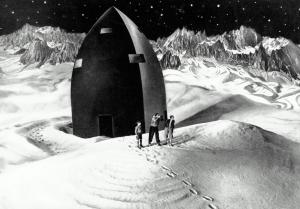 Generally speaking, regarding the science, the film is pretty much only of nostalgic worth. But there is something to it anyway, the scope of the imagination, the characters, the set-up: it all builds a wonderfully imaginative world that I liked (re-)visiting.

Although I still didn’t warm up to the love triangle, I did warm to the film in general on second viewing (and I wasn’t cold towards it to begin with). It definitely pays to check it out, especially if you like science fiction. 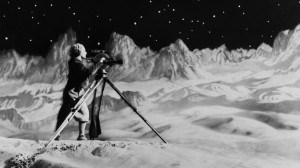 Summarizing: Worth seeing – at least with Brock’s music.