Plot:
Tom (Michael Shannon) and his wife Ramina (Azita Ghanizada) expect guests for dinner. Ramina is a jewelry designer who has recently been accepted into a design program across the country. Tom is ambivalent about moving and leaving his work behind. But before they can fight about this (again), their guests arrive and interrupt. Among them is Tom’s co-worker Clyde (Michael Chernus) who brought a date – the lovely Alice (Rachel Weisz). Michael is sure he knows Alice, but refers to her as Jenny. Her sudden re-appearance in Tom’s life throws him for a loop.

From the description I expected Complete Unknown to be an entirely different film, a thriller, something dramatic, dark and tension-filled. Instead I got a dialogue-driven rumination on identity. It wasn’t bad by a long-shot, but I did feel a little disappointed by that as the turn to darkness never came. Fortunately not for long, though. 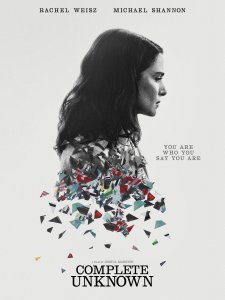 If you want a dialogue-driven film that is basically two characters talking through the night, you need charismatic leads and good characters to make it work. Rachel Weisz and Michael Shannon have no trouble keeping up their end of the bargain, but it is obvious that the film is much more interested in Jenny/Alice than in Tom. I can relate – she is a fascinating character with the additional bonus of affording Weisz the opportunity to change skins quite a bit. But it does create a slight imbalance between the two and in the film that makes it wobble a little more than necessary or recommended.

But still, Shannon and Weisz are wonderful and have a great chemistry together, so there’s at least that. Plus, there is a great scene with Kathy Bates and Danny Glover that is a wonderful highlight of the film. 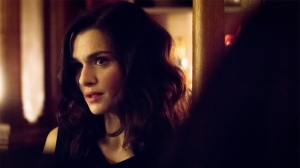 The film traces an interesting arc and has some good and rather unususal thoughts on identity and creation and the limits we pose on our own lives as much as the limits that get posed on us. I found myself caught up in Alice/Jenny’s take on self-invention alongside Tom and once I didn’t expect bodies to come flying out of closets and basements at every turn anymore, I was much more able to pay attention to the resistance that Jenny/Alice puts up against unasked for demands the world – and men – keep laying on her.

There is much to like about the film and once I left my preconceptions behind (and once the film stopped introducing Alice/Jenny as a mystery and started peeling back the layers of her personality), I very much did like it. 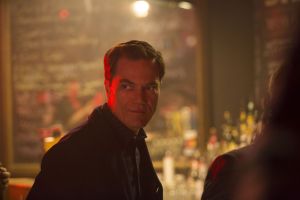 Summarizing: A litte strange, in a very good way.