Plot:
Toni (Michael Ostrowski) and Horst (Andreas Kiendl) don’t really have much going for themselves. But at least Horst an live cheaply in his grandmother’s apartment. The only trouble is: his grandmother has been dead for a while and if anybody were to find out, his comfortable life would be over. So when he gets a letter from the mayor who wants to congratulate the grandmother on her 100th birthday, Horst and Toni decide to quickly borrow an old woman from the hospital. It just so happens that they manage to take famous actress Elfriede Ott (Elfriede Ott), leading to more trouble than they bargained for.

I’ve heard a lot of good things about this movie, but it’s definitely one of those comedies that really don’t work for me. It had its moments here and there, but altogether it falls in the category of “it’s a thing I’ve seen now.” 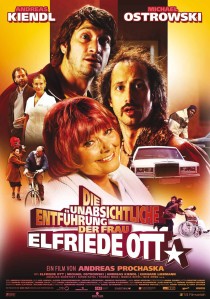 The highlight of the film is definitely Elfriede Ott who obviously has a lot of fun with playing a pretty overblown version of herself which allows her to do all of kinds of shit she normally never gets to do (probably. I assume).

But other than that (and Kiendl’s prettiness), there is not much that worked for me in the film. It just wasn’t my sense of humor. I’m not into stoner comedies with sexist leanings – and that’s just what this film is.

I particularly struggled with Ostrowski’s Toni, an unlikeable character who quickly started to get on my nerves. I just didn’t understand why anybody would want to spend more than three minutes with him – and why Horst would want to be friends with him. Not that Horst was such a great character either.

There were just too many clichés at work here, clichés that have run their course and should be laid to rest. I was very willing to like the film, which failed. But in the end it isn’t even strong enough to really make me dislike it.