Plot:
April (Amanda Fuller) and Eric (Ethan Embry) run a second hand clothing store together and are also a couple. Things have become tense between the two of them and April suspects that Eric has an affair. That’s when Randall (Eric Balfour) shows up. He’s rich, he is as interested in fashion as April is, and he feels dangerous – but to April, he is an irresistible draw as things with Eric go from bad to worse.

Fashionista was one of the strongest films of the /slash Filmfestival. A tense film with a great cast that had me on the edge of my seat with goosebumps all over pretty much the entire time.

With Fashionista, Rumley has created a film with an amazing atmosphere (and great soundtrack) that managed to draw me in entirely even though I’m probably the person least interested in fashion I’ve ever met (after my father at least). But fashion here is less about fashion in its own right and more about the things it is used for – and those things I am interested in: emotional support, self-expression, power. It’s an unusual way to deal with fashion in any case.

The film assembles a fantastic cast. Amanda Fuller is an expressive lead and I could hardly take my eyes off of her. Ethan Embry gives his Eric the necessary depth to make the character work. And Eric Balfour is absolutely electric as Randall: while it’s obvious that Randall is not a good guy (to put it mildly), I could still understand why April would feel drawn to him. 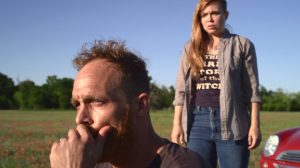 Rumley chose to tell the story achronologically and he remains in control of it the entire time, so no confusion whatsoever arises and it’s always clear what is happening when. What those events mean, though, can be discussed at length, though.

Really the only thing that doesn’t work at all are the ‘kinky Asians’ who make an appeareance rather late in the film. It’s a racist stereotype in action and the film should have done without that shit.

Other than that, though, I was really floored by it.