Plot:
Ian (Ian Meadows) and Sam (Harriet Dyer) decide to spend New Year’s Eve camping in the outback. As they set up their tent they discover an empty tent not far from them. Not thinking much of it at first, they become a little concerned when nobody comes back to the tent. When they find a lone toddler in the woods, their concern turns into panic. But before they can get help, they run into two men (Aaron Pedersen, Aaron Glenane) who probably aren’t up to much good.

Killing Ground operates a little too much along the usual plot lines, but it does so rather effectively, making it a solid film. 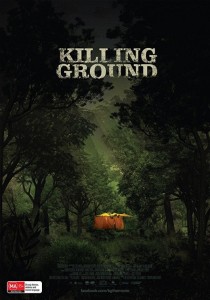 Killing Ground builds its tension well and manages to keep it most of the time. It’s only at the very end that the film turns a little long and just takes one story turn too much, while leaving out another: we don’t know what happened to [SPOILER] the baby [/SPOILER]. This felt less like a narrative choice than an oversight.

If the plot hadn’t been so much “been there, seen that” (including, of course, entirely unnecessary rape, because what else can possibly happen to women), I would have been much happier with the film, because it does show a lot of strengths, especially in the way it narrates. This became obvious in the way the various plot threads were told in parallel in a really fantastic way. And there was that one shot where Ian and Sam load the car while the toddler can be seen in the background that was hauntingly perfect.

But with those villains, the story just wouldn’t take off quite as it could have. How often can we make and watch films about “hillbillies” threatening torturing and killing for fun those wonderful middle-class people who just want to be happy and do right? I feel like I’ve seen a million of them already.

As I said, at least in this case that concept was competently handled and the cast was strong. But a little more deviation from the tried and tested (classism) wouldn’t have done it any harm.

Summarizing: For what it is, it’s pretty okay.