Plot:
You wake up in a sterile room. A beautiful woman, Estelle (Haley Bennett), informs you that you were just resurrected, your name is Henry and that she is your wife. You lost your memories and several body parts have been replaced by highly advanced protheses. Before you can really grasp the situation, you are attacked and Estelle is kidnapped by Akan (Danila Kozlovsky), a telekinetic gangster with an entire mercenary army at his disposal. You get away but have to figure out a plan to get Estelle back. So when the very strange Jimmy (Sharlto Copley) offers his help, you’re willing to take it.

Hardcore Henry is shot entirely from the first perspective and basically in real time, making it the cinematic equivalent of a first person shooter. That concept works well, although the storytelling was sacrificed for it. 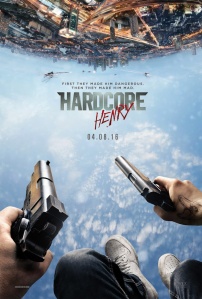 Going into the film, I was a little worried that I’d end up with motion sickness. But surprisingly that was never an issue (though it is probably good that the film didn’t last much longer than it did – it does get exhausting to watch). The camera is surprisingly stable for being strapped to a guy’s head pretty much the entire time. The concept means that they should have made do without cuts, but I wasn’t bothered by the fact that they decided against that. There was not one moment where it doesn’t work, even if it is sometimes a little rough (only a little).

Apart from the technical side of things, the film is fast paced and entertaining, with Sharlto Copley being a special draw: he brings the humor to a film that would otherwise be lacking (apart from the absolutely amazing use of the Wilhelm scream) and his exact involvement in the story even kept me guessing for a bit.

Admittedly though, the story is the weakest part of the film. If you asked me – as someone with a very limited knowledge of computer games in general and FPS in particular – to come up with the classic (if not to say clichéd) story for a FPS, it would probably be pretty much exactly what we see here. We got the hero, the quest to save a beautiful woman, the funny, weird sidekick (in a game that would be the computer) that leads through the world (but only ever divulges so much information) and an evil guy with an army of henchmen to fight. the only part that just wouldn’t fit into the film is Akan’s telekinetic power. That seemed out of place.

Harcore Henry proves that telling a coherent, working film through the first perspective works (although it has been done before, so whether that proof was actually necessary, remains a question) and you can even have some pretty great action scenes in that set-up. Now all we need is a story actually worth telling and you’ll get a movie that is more than its gimmick.