Yoga Hosers could be read as a sequel to Tusk as Lily-Rose Depp and Harley Quinn Smith appeared as the Colleens there. Unfortunately, they also brought Johnny Depp’s worst character Guy Lapointe with them. He was already unnecessary, unfunny and annoying in that film, he is even more so here because people should have known better by now. (Also annoying and unfunny was that we get the excerpt from Kevin Smith’s podcast that inspired this film during the credits and as with Tusk, where they do the same, it’s simply not funny to listen to hysterical laughter and that’s pretty much all it is.)

Fortunately Lily-Rose Depp and Harley Quinn Smith are charming and I reallly love their characters. The Colleens seem to be every cliché of millennial girls ever, but they are not a devaluing parody. They get to stare at their cell phones and be shallow but also have personalities and skills and depths. Kudos to that. I could have done without their singing, though.

Not all jokes worked for me. I’m simply not a huge fan of Nazi jokes (as an Austrian this rarely feels appropriate) and there are plenty of those. But I did enjoy the various yoga poses and the Canada jokes that abound (the store The Colleens work at is called Eh-2-Zed, they sell Pucky Charms and aboots and ehs are everywhere in general).

With all the various cameos and since they have Natasha Lyonne to make everything better, I enjoyed most of the film, despite unfunny and gross Johnny Depp. 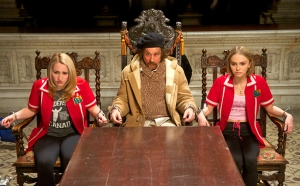