Plot:
[Hell, if you don’t know what Harry Potter is about, you might not want to start here. Anyway.]
Harry (Daniel Radcliffe), Ron (Rupert Grint) and Hermione (Emma Watson) leave school to find and destroy the horcruxes that keep Voldemort (Ralph Fiennes) alive. But the search is more difficult and dangerous than they anticipated.

I’ve said it before, I’ll say it again: I think both the books as well as the movies have reached their peak with number four (though The Prisoner of Azkaban is a close second). HPatDH1 did nothing to change my point of view on that. The pacing’s bad, the direction is worse and there’s no reason to drag this out in two films, since nothing really happens in this one anyway. 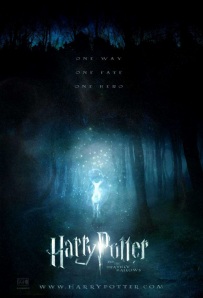 It’s not that the film is not entertaining. Playing “Where do I know them from” with the cast alone (which was wonderful as usual) should occupy you for about half of the time of the film. And it was pretty funny (they left the “holy” scene in, which was one of my favoritest moments in the entire series ever. I just love Fred and George).

But they concentrated too much on Harry, Hermione and Ron, who do not much more than sit around in the woods, being emo and imitating Lord of the Rings. They don’t spend enough time with the minor characters [I want more Neville! More Lupin! More Hagrid! More Snape! And there can never be enough Fred and George ;)], most of which only get a few seconds screen time. 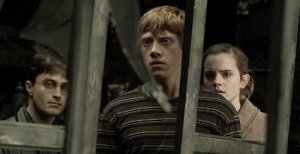 But the worst offender of the film was David Yates. Why they went with the guy who made a mess of film number five and completely butchered film numbere six, I will never understand. But now we’re stuck with him, his crappy pacing and his inability to make a shot where the camera is calm. For ever.

At least the soundtrack was really nice (Alexandre Desplat, what else do I need to say?). And while the cut in the middle would be awkward under the best circumstances, it wasn’t bad. Also, Britain is really pretty to look at. 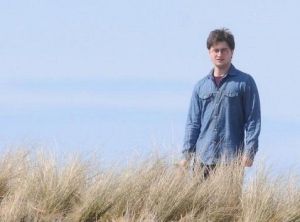 Summarising: Not a total loss, but it could have been so much better.